Outback Aerial Mission was established in Longreach in 1961, by Es and Val Morse. Charles and Val Gray soon joined them. In response to the isolation and hardships being faced by people in the outback, Es and Charles began to visit and reach out with the gospel using a small plane as the means of transport. L es and Dorothy Batterham and then George and Lynette Dean have continued the ministry to the outback people since 1981 when Es and Val moved on.


In 1996 Steve and Lorraine Cavill moved to Longreach to take up the task after the Deans moved on. Since then Es has hung up his flying goggles and retired and the Cavills continue the work in western Queensland.

THE PURPOSE of Outback Aerial Mission is simply to present the Christian gospel to people in the outback, and to encourage them in their personal relationship with the Lord Jesus Christ.

Achievement of this purpose has to this point been tackled by direct contact with people on their properties using the aircraft. The area we service in Central Western Queensland covers some 220 000 square kilometres – an area three times the size of Tasmania! Due to the immensity of this area, the plane has become an integral element in this ministry.

As well as visiting people on their properties Religious Education classes are conducted in many isolated schools. Church services and Bible study on properties, towns or in the Cavill’s home as well as weddings and funerals and associated counselling are all part of the work.

FUNDING is by Gods supply through various churches, individuals, families and businesses as God’s people are moved to have a part in the work.

WANT TO PLAY A PART?  Please pray for the work. 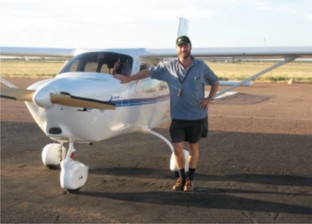 Wednesday, 13 June 2012
Heading to church on Sunday is an easy thing for a city-dwelling Christian. But for Christians in some of Australia’s most isolated and remote regions, the nearest church can be hours away.

That’s where pastor pilot Steve Cavill of Outback Aerial Mission comes in, bridging the wide, open spaces of the Australian outback. The non-denominational Christian organisation celebrated its 50th anniversary doing just that over the weekend in Longreach, Queensland.
“We want to take Christian ministry to isolated people,” says Steve. “In our area of the world there’s few people outside town that can actually make it to church because of the distance they’d need to travel – they’re often two or three hours away.”
So Steve goes to them. It’s a time-honoured job, and he’s the fourth in line. Esrom Morse was the first flying pastor for Outback Aerial Mission who, according to his self-published memoir, has spent more than forty years in outback Australia and amassed 12,500 hours flying a single-engine plane.

Nowadays, Steve Cavill, flys a Jaburi 4-seater lightweight plane around central and western Queensland, from the town of Alpha (west of Emerald), to the western Queensland border.
“I’m flying about three to four days every week and most of the work is relational, reaching out to people on isolated properties and towns. I teach religious education in schools and visit people on their properties.”
Steve says it’s rare to have someone ask him to visit, but he likes to ‘drop in’ anyway.
“I’ll be flying over a property and make them aware that I’m in the area, usually by radio. If it’s a good time and they’re keen for a chat, I’ll ask them what their airstrip’s like and if it’s usable. Then I’ll fly in, land and we’ll have chat. I’m not just talking with people, I also like to check if there’s anything practical I can help with.”

Perhaps the most unusual example of this practical assistance is helping a pastor in a small country town to clean out his toilet system that had blocked up. But other, less smelly jobs often emerge.
“I helped do a search and rescue for a man lost in the outback. I’ve done medical evacuations helping get people to hospital. I’ve helped with mustering and yard work when people need an extra pair of hands,” says Steve.
But his ‘calling’, what he feels most comfortable doing, says Steve, is evangelism and teaching the gospel.
“People aren’t necessarily open to the gospel, but they’re always friendly and polite. We’ve had people who’ve been really interested in what we’ve got to say about God, and I’ve done bible studies with them, taken them through Christianity Explained, and some have come to know the Lord and Saviour. It’s what we want to do, ultimately – lead those who are seeking God to Him.”

Steve is passionate about his job. Having grown up on a farm near Gippsland in Victoria he understands what people in remote areas are going through. He recalls many moments where he feels God sent him to a property when someone really needed a friend.
“I was on my way to a school and was confronted with a dust storm that the plane couldn’t get through. So I turned back, and landed on a property to make a call to tell people where I was. The chap on that property was very lonely. He was on his own, his wife and daughter were in town for his daughter’s schooling, and that was a 4 and a half hour drive away. The property was in drought and it wasn’t possible for him to get away. “One of his daily chores was going around the dams and pulling dead livestock from the mud that remained after the water was gone, or putting those livestock incapable of surviving the drought to death. He was depressed, and I was able to spend some time with him, pray for him. “I felt God had pulled me back for that purpose on that particular day.”

Steve says there is so much more opportunity for pastors in remote areas. Outback Aerial Mission is praying for another pastor pilot to be based at Longreach in Queensland.  “I’d like to be able to have more time to get to more properties. There’s definitely a need there,” Steve says adding isolated schools are seeking teachers for religious education, but the supply of teachers in remote areas is lacking. Steve teaches at 17 schools, with one class per term for each school.

“If we had another pilot pastor, that could easily be expanded. It’s a big section of the work I do, and such a worthwhile part of it too.”
Aside from a committee based in Longreach, Outback Aerial Mission is made up of just Steve and his wife. “We’re all there is,” he says. Upto now there’s no website. It’s difficult to find more than a phone number for Steve anywhere online. For 50 years though, remote Queenslanders have had a pilot pastor, supported by donations from churches, individuals and businesses.

“There’s no solid income with this job,” Steve says, “we’re relying on the Lord. God is a tremendous provider.”

Image: Steve Cavill and his plane.